What are the key differences between hornets and wasps? And to complicate things even further…what about bees? If you are facing an infestation of any of these insects, then it’s critical you know which is which. You have to discern whether you have wasps, bees or hornets on your property to tackle them properly.

This is very important because many people get these insects mixed up. If you have bees on your property, then you should usually leave them alone. For example, bees are relatively harmless and are needed for the environment to function. Wasps and hornets also play some role in the eco system, but pose a greater threat to humans.

The key differences between hornets and wasps (and bees)

If you own a home, it’s inevitable that one day you’ll have to deal with wasps. These insects are attracted to the easily available food sources which they find in residential homes. They are also attracted by fact that there are many places to build their nests around your home. For example, these insects love building their nests in corners where walls meet. Or under overhanging roofs and inside your attic or walls. 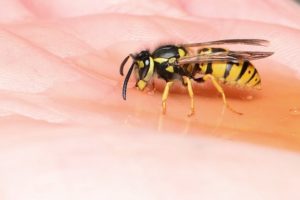 The main differences between hornets and wasps and bees are their appearance and size. They all have yellow and black stripes along their bodies. Bees have a fuzzy and hairy appearance. Hornets and wasps, on the other hand, have hairless bodies. While these insects look almost exactly the same there are differences in their size and appearance. Wasps are about two thirds of an inch, while hornets are larger.

More differences between these insects

Hornets, wasps and bees all have a different diet. Bees live off nectar, while hornets and wasps are scavengers. These insects have a widely varying diet, but they mostly feed on other insects and decaying fruit. Another big difference is that bees die after stinging you while wasps and hornets do not. All three of these insects can be dangerous if they sting you. The reason why you need to know the differences between hornets and wasps is simply because hornets are more dangerous. In fact, they are FAR more dangerous. Their sting is more painful than that of a bee or wasp. It can also be extremely dangerous if you have allergies. The sting could send you off to the hospital. There are some cases where people have been stung by a wasp or hornet and have actually died.

Know if you have hornets, wasps or bees

With this simple guide you should be able to visually discern what type of insect you have. Another dead giveaway are their nests. Bees have distinctive honeycomb shaped nests which may even be dripping with honey. These are just some of the differences between hornets and wasps and bees. No matter what type of insect you have, it is not a good idea to attempt to remove them yourself. This is especially important in the case of hornets. Due to the fact that these bugs are larger, they also carry far more venom than wasps. Their stings can be incredibly painful and this pain will last for days, if not weeks. For this reason, it is vital that you learn the differences between hornets, wasps and bees.